A major is a particular program of study based on one or more academic disciplines. Students apply directly into the major of their choice when completing the Admissions application form for Occupational Endorsements (OE), Associate (Assoc) & Certificate (Cert) programs, or Bachelor-4 Year programs. The admission requirements for each level vary, wherein Occupational Endorsements and Certificate and Associate Degree programs do not require students to submit SAT or ACT test scores, but Bachelor Degree programs require SAT or ACT test scores and completion of the required number of high school core curriculum credits.

Students who applied for a bachelor’s degree major, but do not meet the baccalaureate admissions criteria are admitted into Pre-major status based on their intended baccalaureate major. For instance, a student who applied for admittance into the Mechanical Engineering major, but did not meet the required admission standards for College of Engineering and Mines majors will be admitted as Pre-major Mechanical Engineering. Once Pre-major students have completed 14 credits (of which 9 credits must satisfy baccalaureate Core requirements) at the 100-level or above with a C (2.0) average or higher, the Vice Provost will contact the Office of Admissions and the Registrar to change the student into an approved baccalaureate major.

Some baccalaureate degrees (i.e., BA) and majors (i.e. Arts & Sciences) require students to complete a minor as part of the requirements for that degree or major.   A minor is a grouping of course credits into a UAF-approved subject area of at least 15 credits. Even if a minor is not required for the student’s major or degree program, a student may choose to complete a minor, especially if the student wants to coordinate their elective credits into a disciplinary area.  Some degrees and majors allow students to use a Certificate, AAS degree, or two-years of non-English language study at the university level, (in one language), as a substitute for the minor requirement. The student must use the same catalog year for the minor and major graduation requirements.

Graduation Services staff reports that students tend to wait until their last year of study to declare their minor. Academic advisors should encourage students to declare their minor as early as possible so the student can accurately plot out his or her degree plan, and so the academic department representing the minor can adequately plan enrollment for upcoming semesters.

UAF offers 53 baccalaureate majors, 27 associate majors, 29 certificate programs, 16 occupational endorsement programs, and 60 minors. The UAF Catalog  includes two useful tables that list all of UAF’s majors and minors. One of the tables, Majors, includes a link to each major and minor that includes a description of the major/minor, the major/minor requirements, and a link to a downloadable pdf of the major, which includes on the second page, baccalaureate Core or AAS/certificate degree requirements for that major. Unfortunately, the downloadable pdf does not include the bachelor degree requirements for each respective baccalaureate major or general university requirements for each major or program.

The other table, Degrees and Programs at a Glance, provides a chart including all UAF degree programs and notes which majors and minors can be completed via eCampus.

Students who wish to add, drop, or change their major at the same level (bachelor’s, or associate’s/certificate) do so using the Change of Major Form. The department chair or academic advisor’s signature is not necessary for students who want to drop a major. The student forwards the form to the department chair of the academic area within the additional or new major. The department chair will review the request and submit the form to the Office of Admissions and the Registrar in 102 Signers’ Hall to be processed.   If the add or change of major is approved, the student should see the change in UAOnline within a few weeks.

Students who wish to add or change their major to one at a different level (bachelor’s to associate/certificate, or associate/certificate to bachelor’s degree program) do not use the Change of Major form, but apply for admission into the new level via UAOnline.Students who wish to declare a minor do so using the Declaration of Minor Form. The student forwards the form to the department chair of the academic area of the minor or with an academic advisor within the minor. The academic advisor for the minor or the department chair overseeing the minor will review the form and submit the form to the Office of the Registrar in 102 Signers’ Hall to be processed.   If the minor is approved, the student should see the change in UAOnline within a few weeks.

Double majors differ from double degrees in that double majors must be within the same degree (i.e., B.A. and B.A.) and must follow the same catalog year.   There are no additional credits required beyond the major that has the most credits, as long as students complete all graduation requirements for the double major (120 minimum credits). Whereas, students completing a double degree must have at least 24 credit hours beyond the total required for the first degree (144 minimum credits). 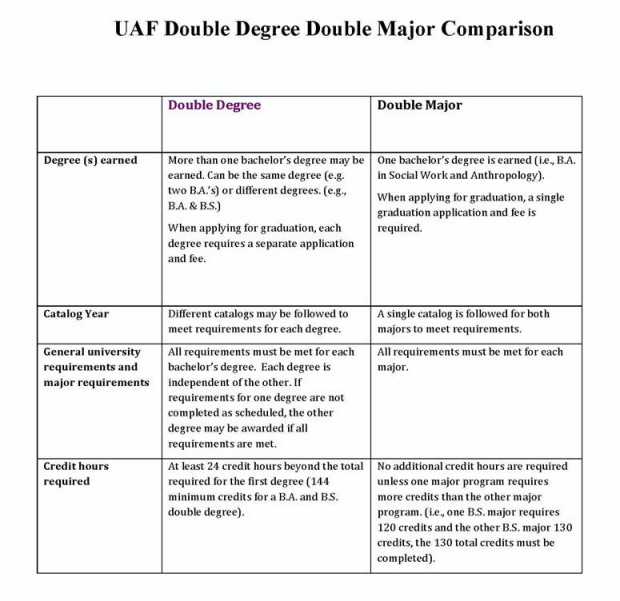 There are five opportunities to test your knowledge from these five modules. You can access the quizzes directly by clicking here:

Note: You probably want to study each module before you begin answering that module's questions. You will see this same portal at the end of each module. If you leave after completing any one set of module questions, this portal will return you to where you left off.

This work is licensed under a Creative Commons Attribution-NonCommercial 4.0 International License.
Scroll Up